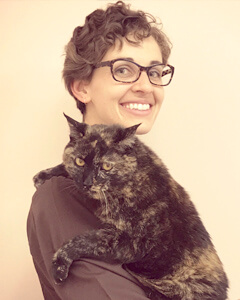 Dr. Liz Georges was raised on the Hawaiian island of Maui. In 2006, she received a Bachelor’s Degree in Animal Sciences from Oregon State University and subsequently her Doctor of Veterinary Medicine Degree from Colorado State University in 2010. Through several trips to New Mexico beginning in 2006, Dr. Georges fell in love with the New Mexican scenery, activities, and food, and elected to pursue internship training at VCA Veterinary Care Animal Hospital and Referral Center in Albuquerque, NM in 2010.

A strong interest in international veterinary medicine and cross-cultural exchange has taken her to Costa Rica, Greece, and Japan where she has learned a great deal about various animal care techniques and animal care values. Internship training has allowed a comfort in emergency care as well as helped to solidify an interest in general practice and wellness care.

In addition to the patients Dr. Georges considers family, she has a cat named Stevie and a Yorkie named Gage. While Stevie spends her time at home, Gage is found at the office, at the park or riding shotgun in the car or on their bike.