Dog communication uses most of the senses, including smells, sounds and visual cues. Pheromones, glandular secretions, barks, whines, yips, growls, body postures, etc., all serve as effective means of communication between dogs. Unlike in people, canine body postures and olfactory (scent) cues are significant components of dog language and vocal communications are less significant. People are listeners; dogs are watchers. Another major difference between human and canine communication is the type of information communicated. Language enables humans to communicate very specific messages. Dog communication involves the use of characteristic body posturing and shows emotional states, but not always specific intent or actions. Communication between dogs and people does not occur through a tangible “language” so the messages that are shared across species tend to be more general in nature or can be missed or misinterpreted. For family members who want to understand their dog’s behavior, recognition of these body signals can serve as a useful tool for interpreting “dog language.” Just like people, some dogs are better communicators than others. Things to watch for when dogs communicate are primarily body language and posturing, including position of the head and neck, position of the ears, tail position and activity, raised hair over shoulders or back, position of eyes and ears, facial expressions, and vocalization.

What are conflict-related behaviors?

Conflict-related behaviors arise when a dog is faced with contradictory and perhaps competing motivations. For example, a dog may wish to be near his owner yet may be fearful of the child on his lap. Your dog may feel conflicted when he perceives that situation as confrontational, or when he cannot predict what is going to happen next. The dog may be motivated to retreat and remain – both at the same time. This internal conflict affects how a dog responds, and can be shown through characteristic body postures that serve as signals to communicate with other dogs. If the situation allows, dog body language is communicated on a graduated scale. Benign, subtle postures usually come before more aggressive, bold communications, but an individual dog may skip subtle signals or progress through graduated signals extremely rapidly depending on his perception of the situation and past experiences. Other dogs may show subtle anxiety or conflict signs while never escalating to an aggressive event. Warning signs or threats typically present first. How well these signs can be read by people varies both in the dog’s skill at expressing himself and the humans’ skilful attention to these cues. Though any presentation may escalate up to an attack with little or no warning, there are often signs of conflict, stress, anxiety or aggression that preceded the aggressive event.

How does my dog display appeasement or “submissive” signals?

Appeasement body signals are intended to communicate a reduction of a threat. These body postures are a dog’s way to help stop or lessen oncoming aggression or punishment by a more confident, bold, pushy or assertive dog. Dogs first exhibit passive submission signals as puppies when being groomed by their mother. The most subtle signal is the avoidance of direct eye contact (aversion of the eyes). This is a very significant gesture since the opposite of which (a direct stare) communicates a threat. It signals that the dog is putting itself at risk by not visually following a circumstance that could change rapidly.

Yawning and nose-licking are considered to be ambivalent behaviors, meaning that the dog is cautious, concerned, stressed, anxious, or has the potential to respond with aggression if the situation escalates or persists. In addition, dogs may also lower their ears, head and neck and may twist their neck sideways to look away. They may flick their tongue and often hold their tail low or between the legs. They may wag their tail but will often stop wagging or freeze when touched. These postures are often described as “appeasement” behaviors because they communicate a desire for the threat to stop and no desire for confrontation. In dog language, these postures are very clear and logical signals.

Progression of submissive signals includes: low crouching, raising a front paw, lying down, and rolling over to expose the abdomen. This behavior developed from puppyhood when a pup would present to an adult in the group. Puppies need an opportunity to learn and practice the skill of canine communication with friendly, social adult dogs. Rolling over is often a sign of extreme submission and may involve urination. Submissive rolling can be a sign of fear and/or deference and should not be misinterpreted as stubbornness or solicitation of petting. Some dogs have learned to enjoy petting on the belly and will present the abdomen to invite this attention; to determine the dog’s motivation, you have to look at the other signals he is displaying. The ultimate goal of submissive posturing is to decrease any sign of perceived threat. Other dogs read these signals as a reason to be calm and relax.

Why does my dog look guilty?

Often, submissive or appeasement signals are misinterpreted by owners to be indicative of “guilt” following an undesirable behavior. In truth, dogs that display submissive postures towards their owners are likely responding to discernible human body language or past association with punishment and are attempting to lessen predictable forthcoming punishment based on previous experience. Simply put the dog is saying “don’t hurt me.” This is similar to human relationships; often when we argue with others they may be sorry, apologetic and maybe even offer a gift of flowers or other kind gesture. Closer discussion reveals that while the person is willing to do anything to make the fighting stop, they may not be accepting blame or even understand the underlying reason for the conflict. This is appeasement: a gesture which communicates a desire for the threat to stop. Don’t assume that your dog knows that he did something wrong just because he lays down and rolls over on his back; in fact, he probably has no idea what you want he just hopes this grand canine gesture of appeasement will work.

How does a dog communicate with its body? 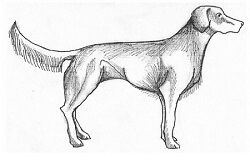 Figure 1. This dog is bright and alert, but not aroused. the tail is up, but in a neutral position as are the ears and the body is relaxed and not stiff.

Figure 2 This dog has its head, neck and tail lowered. The eyes are averted and the dog is licking its nose (an ambivalent sign). This posturing shows uncertainty and underlying fear, and is considered an appeasement behavior. 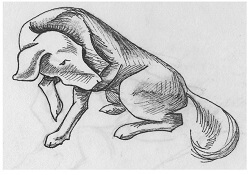 Figure 3 This dog is sitting with a raised paw which is a sign of appeasement. the head and neck are turned away from confrontation and the tail is low on the ground or tucked underneath. This dog is also avoiding direct eye contact and showing signs of fear and submission. 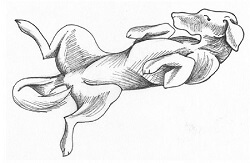 Figure 4 Rolling over is often a sign of extreme submission and may involve urination. Submissive rolling can be a sign of fear and/or deference and should not be misinterpreted as stubbornness or solicitation of petting. 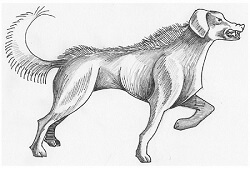 Aggressive body signals attempt to increase the apparent size of the dog that feels threatened. This illusion is meant to stop the approach of the perceived threatening dog or human. The goal is to avoid a fight with minimal effort and exertion of energy. The most subtle sign is a direct stare (direct eye contact with eyes wide open). In dog-to-dog communication, this signal is very effective and there is generally no need for further escalation. However if the dog continues to feel threatened, he may progress to displays of the mouth area, with lips pulled back at the corners, retracting the lips into a snarl. Initially the dog may elevate his head, neck and ears and may then lower them as the threat builds. These postures mark an attempt of the dog to appear larger and more challenging and to protect the throat and ears in the case of an imminent attack.

If the dog continues to feel threatened, he will continue to strengthen his body position by shifting his weight forward and stiffening his legs and toes to increase height. Hair over the shoulders and rump may rise to create the sudden illusion of increased height (raised hackles, with or without barking, indicate that a dog is highly emotionally aroused, not necessarily dominant or aggressive). The tail is held vertically or arched over the back. Movement of the tail may be slow and deliberate or rapid and vibrating, called “flagging.” Alert dogs tend to stand with their tail and ears up and a foot out, indicating an intention of movement and possibly a willingness to approach. As stress heightens, the dog may snap (inhibited bite) as a final warning to indicate that the he is willing to bite if the current situation continues or escalates. The dog may also be growling or barking concurrently.

This is an offensive posture in which the dog has shifted his weight forward and raised one paw in an intention movement. Note that these body signals tend to make the dog appear larger: raised hackles, tense muscles, stiffened limbs, raised neck and perked ears. The lips are curled into a snarl, exposing the teeth and the dog is engaged in a direct stare.

This dog is engaged in a defensive posture aimed to keep the perceived threat at a distance. This dog is signaling underlying fear through its crouched position and tail tucked between its legs. Its hackles are raised, indicating arousal and the characteristic snarl communicates a clear potential to bite.

My dog is submissive. He would never bite. 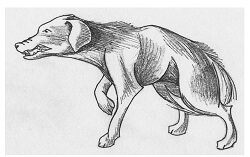 Many people readily use the terms “dominant” and “submissive” to describe their dog’s personality. These are poor terms to describe a personality trait but may be useful in describing a relationship or a single interaction with another dog in a given context at a given time. Hierarchal relationships are not strictly linear in groups of dogs and in free ranging dogs they are probably not as significant as most people think.

However, it is important to realize that both assertive (commonly mislabeled dominant) and submissive body language have the same ultimate purpose: to forestall a potential threat and/or change the outcome of a social encounter. Note then that an escalation of aggression can result if an appropriate response does not occur (i.e., the source of the threat does not subside) whether the dog is displaying assertive or submissive signals. It is a common misconception for people to think that a “submissive” animal will not bite.

When a dog responds to stress or threat, he may communicate with a variety of signals that are classified as assertive or submissive, yet any dog signaling either way may escalate to the point of biting. It is also important to note that all canine body postures are momentary and may change rapidly (especially if subtle clues are not heeded first), and that each individual body signal must be taken in context and evaluated in light of the “big picture” of the dog’s overall behavior at the moment (see (71) Aggression – Diagnosis and Overview).

Dogs may be quite effective communicators but they still only know how to express themselves with their own canine communication. New insights and research is revealing how dogs read our subtle cues, emotions and intentions suggest that our canine best friends really understand us far better than we understand them.