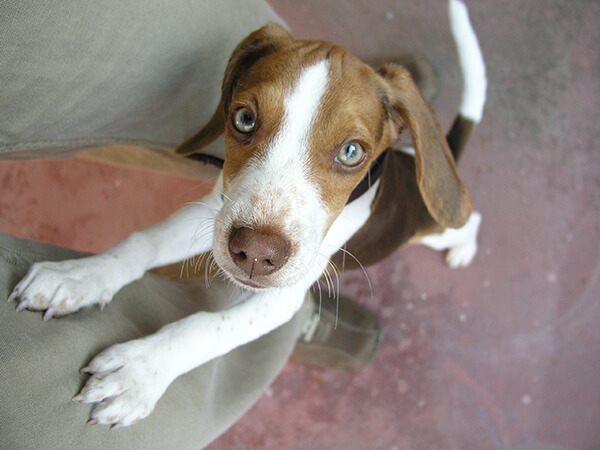 First you have to understand that animals perform behaviors for specific reasons. Animals tend to repeat behaviors that get rewarded and not repeat behaviors that are not rewarding in some way. So with that tid-bit of information, it should be clear to everyone why begging is rewarding—it usually results in getting something delicious to eat! So the simple solution would be “Stop giving the dog food when it begs.” Sounds simple, right? Well how many times have you tried the approach of ignoring the begging and not giving in, to only have your dog simply became more persistent—maybe he began to whine or bark, or maybe he just continues to sit and stare until you could no longer ignore those “beautiful brown eyes.” No matter what the cause, most people finally give in and give the dog some food. Your dog has now learned that if it is just persistent and does not give up, something delicious will be forthcoming. Two important aspects of learning psychology are evident here: the power of intermittent reinforcement and the extinction burst.

Intermittent reinforcement is one of the most powerful forms of reinforcement there is. It can be an extremely useful tool in dog training. When trying to teach an animal a new behavior, it is most effective to reward or reinforce every time the animal displays the desired behavior (called continuous reinforcement). Once the animal has learned a behavior, if you want the behavior to become resistant to extinction, you should begin rewarding intermittently. You are then acting like a slot machine; the dog continues to display the behavior because it never knows when or if it will be rewarded for the behavior. With this method, the behavior becomes very firmly established.

WHAT TO DO: SEPARATE, REWARD SEPARATELY, IGNORE CONSISTENTLY

With that in mind, the first practical instruction is to not put your dog in a position where it can beg since it can be so difficult to ignore a begging dog. The easiest way to do this is to place your dog that begs in a different room, in a crate or designated “settle” area before you sit down for meals. In some cases, your dog may need to be placed in this area while meals are being prepared. The room or crate should be far enough away so that whining can be ignored. If you feel better about feeding your dog during this time that is fine, as long as your dog is away from where you are eating.

Alternatively, you can give your dog a special treat before meals such as a stuffed Kong, or other food-dispensing toy. Your dog is then well-rewarded for being away from the family and their food. This can be extremely useful for dogs that are not comfortable being alone or in a crate. For dogs that are on restricted-calorie diets, measure out the amount of food for the day, every morning. You can then use part of the animal’s daily allotment for filling the food toys or as training treats.

All family members need to be in agreement about this in order for it to work. If small children are in the home, the dog should be kept separate from them when the children eat unless an adult can supervise and prevent children from feeding the dog. Every family member must ignore the begging in order to be successful. Given enough time and persistence on your part, you will eventually stop your dog from begging.