How can I determine if my dog is just acting like a “puppy” or is too excitable or disobedient?

Many excitable and rowdy behaviors that we see in puppies will diminish with time and proper early training.  The unruly dog is one that continues to be difficult for the owner to manage past puppyhood, or 6 to 9 months. Up until this age, puppies may also be excitable, difficult to control, or hard to train, but this would likely not be considered excessive when one considers normal puppy behavioral development and the time required to adequately train. The excitable, unruly, or disobedient dog would be one that after sufficient attention to training, still does not respond to commands, will not walk nicely on a leash, jumps on people, continually barks for attention, steals things or generally wreaks havoc on the household. The problem is compounded in large dogs because of their size.

Do dogs get “attention deficit disorder” or can they be “hyperactive”?

While a hyperactivity disorder likely does exist in dogs, it is rare. Dogs that are hyperactive, also called hyperkinesis or attention deficit hyperactivity disorder (ADHD), can be diagnosed by veterinary examination and testing. Dogs with a hyperactivity disorder are difficult to train, respond poorly to tranquilization, may exhibit repetitive behaviors such as incessant barking or circling, may have gastrointestinal disorders, and can be extremely resistant to restraint. If these dogs do have attention deficit disorder, they may respond paradoxically to amphetamine type drugs.  This means that instead of getting more excitable when given amphetamines, these dogs tend to calm down and become more focused for training. 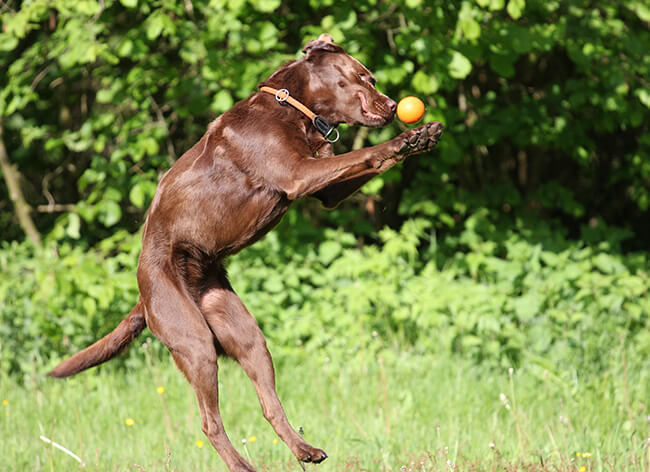 Most cases of hyperactivity are simply overly energetic dogs that are not  getting sufficient exercise and routine….

How can I prevent my puppy from becoming a disobedient dog?

Appropriate, frequent, and regularly scheduled exercise sessions, providing appropriate outlets for normal behaviors, along with an early start to training can go a long way to preventing most unruly behaviors. Waiting to train your puppy until it is 6 months of age can often let these disobedient behaviors take hold. With early training, excitable puppies can often have their behavior channeled in the correct direction. A puppy must consistently be taught the rules and expectations of the family. Asking the puppy to sit for things and teaching the puppy how to relax and settle in a safe location help the puppy learn the rules of the home and self-control. See Play and Exercise, Principles of Teaching and Training Dogs, House Training,  Learn to Earn – Predictable Rewards, Teaching Calm – Settle and Relaxation Training and Learning. By providing a daily routine with sufficient exercise, chewing outlets and training, and teaching the puppy the behaviors that will earn it rewards (learn to earn), most puppies will soon grow out of their problems.

I have tried training my dog without success. What went wrong?

Many owners may have tried traditional obedience training without success. Your dog may still jump on people, bark incessantly and defy commands.
In many cases, the issue is that the dog has not learned what you want him to do instead (see Greeting Behavior – Jumping Up).

Attempting to reprimand all the misbehavior will be ineffective. When you remove a behavior from the animal’s repertoire, it will be replaced with something else. In addition, punishment is intended to teach the dog what not to do, and may make the pet fearful which could lead to avoidance (flight), freezing, or aggression (fight). Instead your goal should be to train and reinforce the behavior that you want your dog to exhibit, or to prevent the undesirable behavior if you are unable to supervise and train. Therefore, the key to changing excitable and disobedient dogs into calmer, better-behaved pets is to reinforce calm, settled behavior rather than punishing what you don’t want. 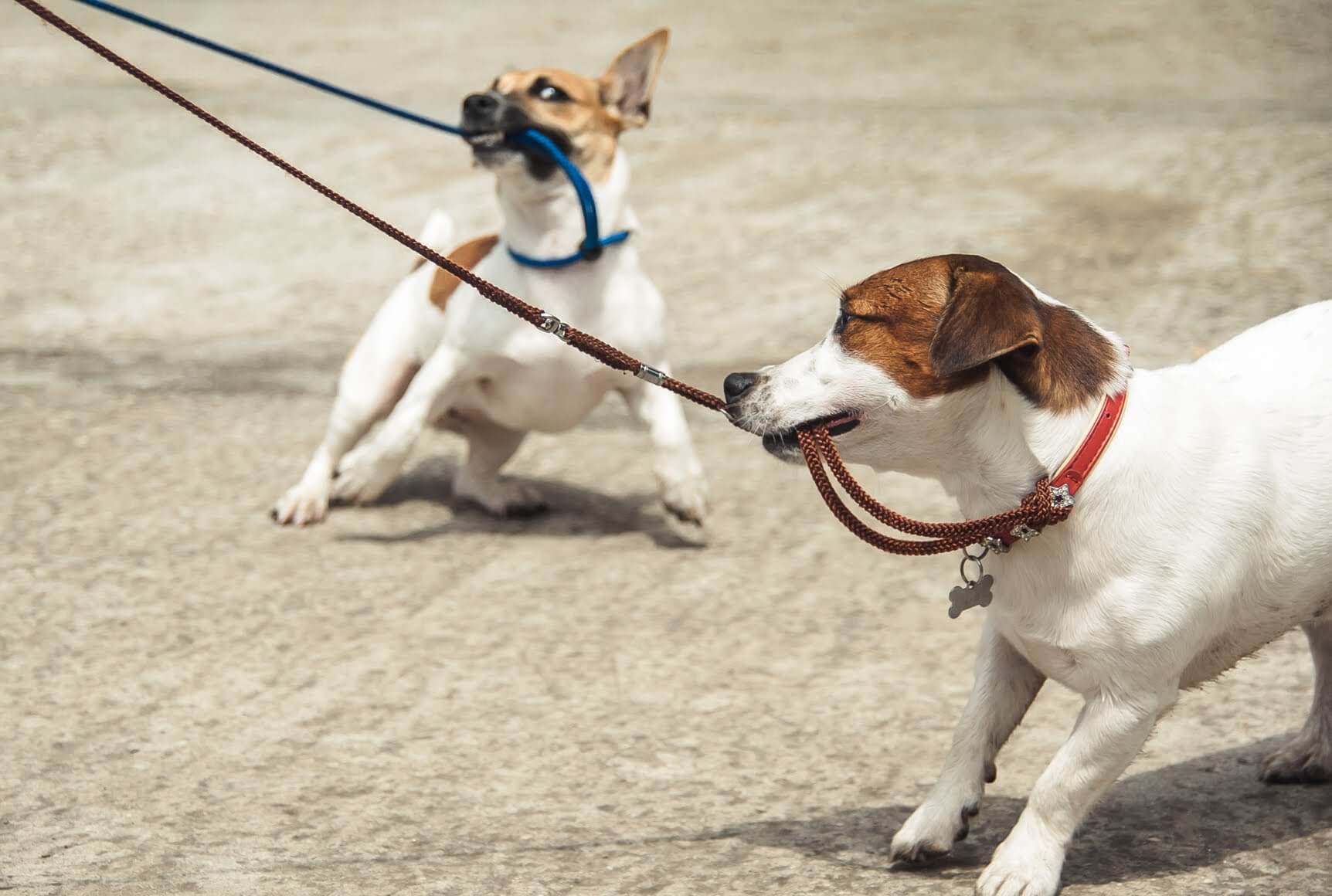 The key to changing excitable and disobedient dogs into calmer, better-behaved pets is to reinforce calm, settled behavior rather than punishing what you don’t want.

Avoid confinement when you are home because this does not allow you to intervene and show your dog the appropriate behavior. Confinement may be necessary when you are not available to supervise your dog, but he or she must first be provided with sufficient exercise, an opportunity to eliminate, appropriate play and affection, and food or treats for desirable behavior (i.e., training) and never for undesirable behavior (barking, attention seeking). In short, quiet, calm, and non-demanding behaviors should be rewarded with play, affection and attention, while demanding, jumping up, or excitable behaviors should be met with inattention.
Another common training error involves actually reinforcing the behaviors that you do not want. Instead of patting, giving attention, or perhaps even a treat to try and stop the behavior, it is essential that these behaviors be met with inattention.

Reprimands and punishment are also often unsuccessful (see Using Punishment Effectively and Why Punishment Should Be Avoided). Some pets will actually consider punishment itself as a form of attention. On the other hand, punishment that is too harsh may lead to anxiety, fear of the owner and problems such as aggression or submissive urination. Disruption devices such as a shake can (small stones or coins in a tin can), an air horn, or an ultrasonic device may interrupt the undesirable behavior without causing fear of the owner. However, if praise for ceasing the behavior and redirection toward a new and acceptable behavior does not occur, the dog is unlikely to change all that much.

How should I start to regain control?

Retraining should begin with good control over your dog and a good understanding of the proper use, timing, and selection of rewards. An obedience training class that uses rewards and non-disciplinary techniques for control, such as head halters (see Head Halter Training and Training Products – Head Halter Training for Dogs) is a good start. The goal is to get the desired response, reward the desired response, and gradually shape longer and more successful responses. The dog should be well exercised and as calm and focused as possible when training first begins. Ensure that you are in an environment where there are minimal distractions and that you have enough control so that a successful response to the command can be guaranteed.

What do I do if disobedience and unruliness persist?

Most traditional training techniques and devices use punishment to interrupt and deter misbehavior.

Punishment may teach a dog what not to do but it does not teach the dog to perform the desired response. Many of the devices that have been designed to control and train dogs are attached around the dog’s neck to “choke” or correct. Not only can they create discomfort for the dog, they require extremely good timing to teach the dog the proper behavior. Head halters might prove to be a more positive and effective means of achieving the desirable response. Clicker training can also be used as a means of immediately marking and reinforcing behavior (see Clicker and Target Training).

The head halter has been designed to gain control over the dog’s head and muzzle so that the handler is able to train the dog to perform the desired response. The goal of training is to encourage and reward correct responses rather than punish incorrect responses. The head halter increases control in a number of ways. Because dogs have a natural instinct to pull against pressure, a forward and upward pull on the leash will close the mouth and the dog will pull backwards and down into a sit. Therefore, whenever the sit command is given and the dog does not immediately respond, the owner can pull the leash up and forward, look the dog in the eyes, and get the desired response. As soon as the dog is sitting or even begins to sit, the restraint is released and the dog praised.
The command, pull, and release should be immediately repeated if the “problem behavior” is repeated, and positive reinforcement (treat, patting, play) should be provided if the dog continues to “behave.” Using a leash and head halter, an upward and forward pull can be used to immediately and effectively control barking, jumping up, play biting, stealing objects, or pulling and lunging. The head halter also creates a situation “where the head follows, the body goes.” Because the halter controls the head many behaviors can be prevented or interrupted merely by changing the direction of the dog. 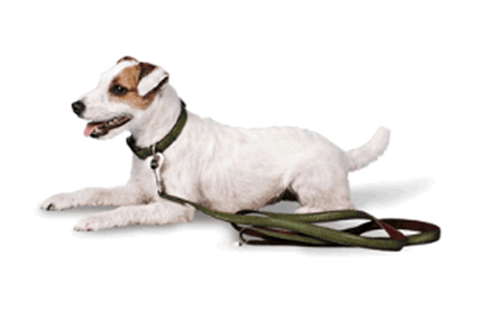 A long indoor lead can be left attached for control from a distance.

Lastly, and equally important, the head halter does not encircle and tighten around the lower neck, so that the dog is not choking while the owner is trying to train. Some brands of head halters are designed so that they can be left on the dog, just like neck collars, all the time when owners are home. A long indoor lead can be left attached for control from a distance. As soon as the dog begins to engage in unacceptable behavior, it can be interrupted and directed into performing the desirable behavior (“sit,” “down,” “quiet”). By the same token, if you give the dog a command and he does not obey, you can always get the compliance that you require if the halter and leash is attached.

Now that I have more control, what else do I need to do?

Often the key to turning an unruly dog into an acceptable pet is continuous control until you reliably can get the behaviors that you want. This is most easily accomplished by having the dog on a leash (attached to a body harness, non-choke neck collar or head halter). This allows you to immediately interrupt undesirable behavior and teach your dog the correct lesson. Once your dog no longer engages in the undesirable behavior, and responds consistently to verbal commands, the leash can be removed. An integral component of controlling an unruly dog entails restructuring the situations so that the unruly behavior is not able to take place, or that interruption is immediate. This can take various forms such as keeping the dog on a leash so that it cannot run through the house, closing doors to other rooms, and limiting the access of the dog to areas where he is unsupervised. Only interact with the dog in a positive manner and set up situations so that the dog will do as the owner asks.