What are counter-conditioning, response substitution, and desensitization?

Counter-conditioning and desensitization are powerful ways to change behavior. They are usually used in combination. Desensitization provides a means of safely exposing the pet to the stimulus at a level at or below which fear is likely to be exhibited. Counter-conditioning is used to change the pet’s attitude or emotional response to a stimulus. Response substitution is a technique in which the pet is taught, using reinforcement-based techniques, to replace the undesirable behavior with one that is desirable.

Although counter-conditioning generally refers to changing the pet’s mood (through positive pairings and associations), and response substitution refers to training the desired behaviors (through reinforcement), the treatment of fear and anxiety must focus on achieving both the desired emotional state and the desired behavioral response. Therefore, these terms may occasionally be used interchangeably. Refer to our companion handouts on implementing exposure training, settle exercises, and reward based training for practical applications as to how desensitization, counter-conditioning, and response substitution can be achieved.

For most behavior problems, especially those associated with fear or anxiety, the use of punishment is contraindicated since, even if it suppresses the undesirable behavior, it may further aggravate the pet’s fear and anxiety without teaching your pet anything new. Training must focus on getting the desired response and a positive mood, rather than trying to stop undesirable responses.

What is classical counter-conditioning?

Counter-conditioning means changing the pet’s emotional response, feelings or attitude toward a stimulus. For example, the dog that lunges at the window when a delivery person walks by is displaying an emotional response of fear or anxiety. Classical counter-conditioning would be accomplished by pairing the sight, sounds and approach of the delivery person with one of the dog’s favored rewards to change the emotional state to one that is calm and positive. Similarly for cats that are anxious or fearful when exposed to a visitor or other cat in the home, we would want to pair the cats favored rewards with the presence of the visitor or other cat. A critical element of success is to prevent any exposure that might lead to a negative outcome during training. For dogs, this might be accomplished by recognizing potential problems and using a sit and focus command, a turn around or maintaining a relaxed walk past the stimulus. 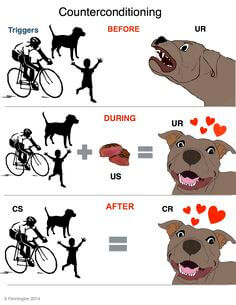 Counter-conditioning means changing the pet’s emotional response, feelings or attitude towards a stimulus.

The key to effective desensitization is to first find the threshold at which the pet first responds by designing a stimulus gradient (from low responses to high responses) so that the pet can be gradually exposed to progressively more intense levels of the stimulus without the undesirable behavior being elicited. Again, it is essential that the threshold not be surpassed unless the pet can be effectively calmed and settled.

What is response substitution?

Response substitution is a technique in which an undesirable behavioral response to a stimulus or situation is changed to one that is desirable. The goal is to reinforce only those responses that are desirable. Reinforcement of a response that is incompatible with the undesirable response might be referred to as differential reinforcement of an incompatible response (DRI). The challenge is to get the desired behavior when exposing the pet to the stimulus, while also getting the appropriate relaxed and happy emotional state. A number of techniques can be used to help the owner turn the inappropriate response into one that is desirable. If the pet is trained through reward based techniques to immediately focus on the owners in response to commands (settle, watch) in the absence of any distracting or fear eliciting stimuli, the training might then progress (through desensitization techniques) to gradually more intense levels of the stimulus. 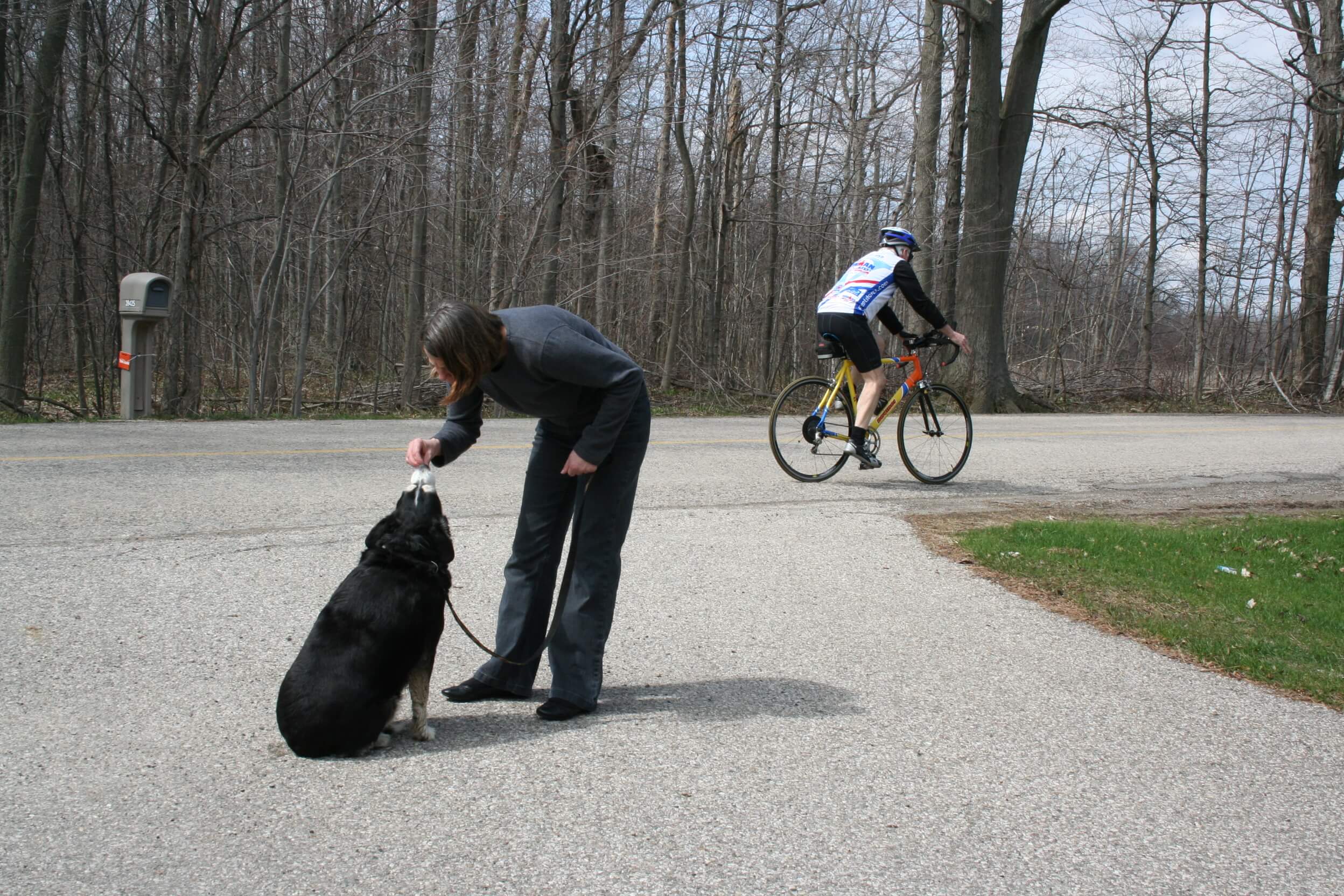 Alternatively, lure and target training or disruptive devices might be used to help more quickly and effectively achieve the desired outcome. For most dogs, a head halter and leash is often the safest, most effective and most immediate method to obtain the desired response (e.g., sit, focus, or heel). In addition to the use of positive reinforcement, an immediate release of leash tension for each successful outcome also serves to reinforce the behavior. This is known as negative reinforcement because the behavior is being reinforced by removal of pressure and tension. For cats a leash and body harness can improve control.

Regardless of the technique used, if the pet can be taught to display a new acceptable response instead of the undesirable response when exposed to a stimulus then response substitution has been achieved. Again, rather than attempting to overcome an intense response, the training should be set up to expose the pet with stimuli of gradually increasing intensity (controlled exposure) to ensure a successful outcome. By working with a gradient and favored rewards, you may also be simultaneously counter-conditioning the pet. However, when working with fear and anxiety, the training is not complete if you merely get the desired behavioral outcome. A positive emotional state (relaxed, eating treats) must also be achieved

using counter-conditioning. For counter-conditioning and response substitution to be most effective, you need This is known as negative reinforcement because the behavior is being reinforced by removal of pressure and tension. to establish a reward gradient for your pet and a method for controlling the exposure to the stimulus in gradually increasing gradients.