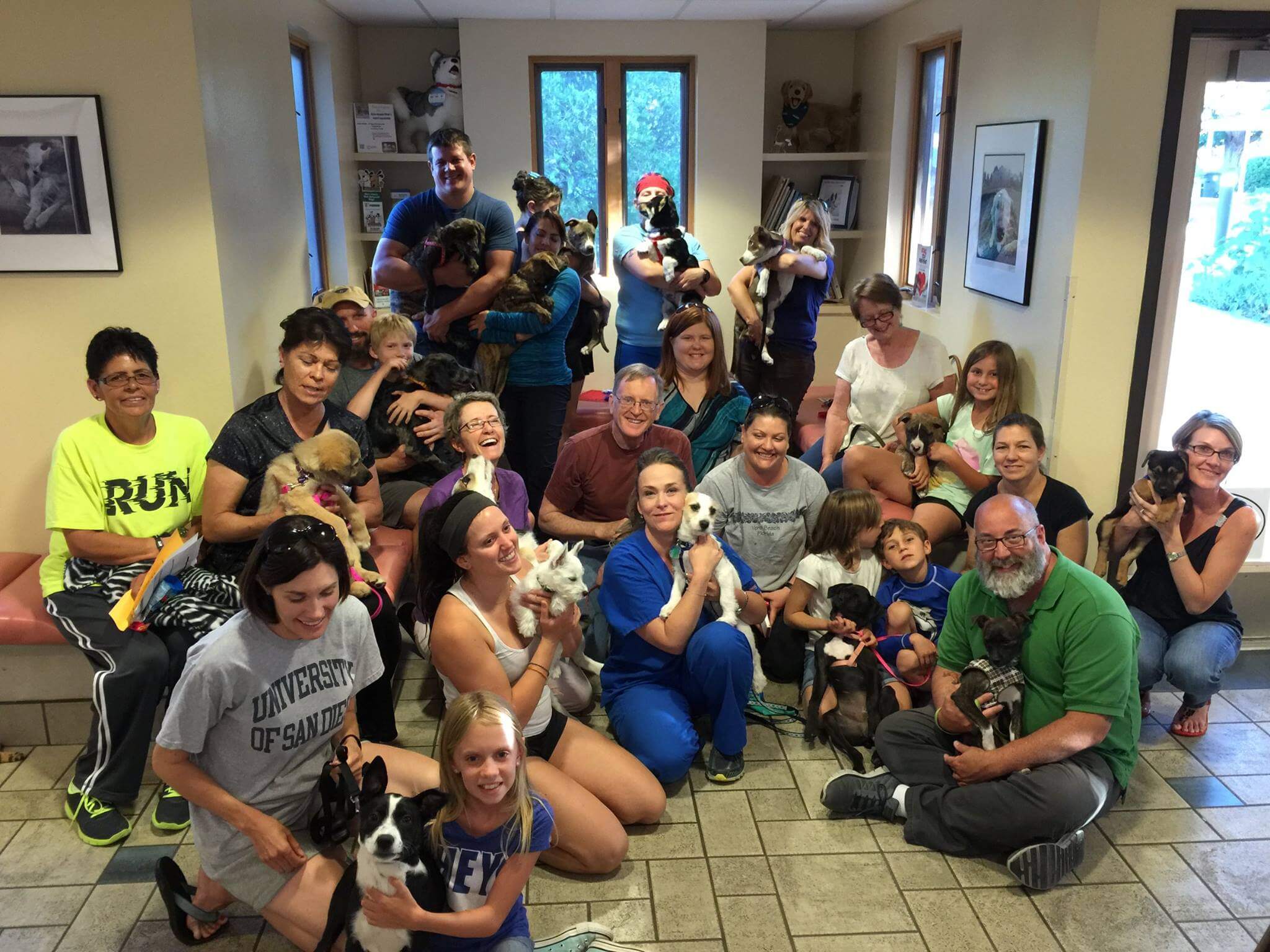 This is the period in a puppy’s life where it develops relationships with other living beings and also learns how to behave and act in new experiences.

While socialization takes place throughout the first year of life, the first 3 months seem to be the most important time for young puppies to learn about their environment. This critical period is when the puppy develops social relationships with other dogs and with other species, including humans. Therefore, this is not only the optimal time for the puppy to spend time learning to communicate and play with other dogs, but is also the most important time to have human contact (as well as exposure to other species with which it might live, such as cats). The balance between socialization with other dogs and with humans can perhaps be best met by having the puppy stay with its littermates and mother in a home where there is also human contact up until about 7 to 8 weeks. Then, it can be adopted into the new human household, where it can hopefully continue its socialization with other dogs (i.e., if there are dogs in the family or through puppy classes).

Two other important aspects of a pup’s development are “habituation” and “localization.”

As all animals develop there are numerous stimuli (sounds, smells, sights and events) that, when unfamiliar, can lead to fear and anxiety. Habituation is the process whereby dogs get used to repeated stimuli, and stop reacting to them, provided that there are no untoward consequences. For habituation to occur, the owner should avoid reinforcing any undesirable responses such as fear.

Localization is the process by which the puppy develops attachment to particular places.

Why are these processes important?

To reduce the possibility of fearful responses as a puppy grows and matures, it is essential to expose young puppies to many stimuli (people, places, and things) when they can most effectively socialize, localize, and habituate to these stimuli. Early handling and events that occur during the first 2 to 4 months of life are critical factors in the social development of the dog. Dogs that receive insufficient exposure to people, other animals and new environments during this time may develop irreversible fears, leading to timidity and/or aggression.

What can I do to improve my chances of having a social, nonfearful dog?

The genetics of the breed and of the parents in particular, play an important role in how sociable, playful, fearful, excitable, or domineering a puppy becomes. Choose a breed and parents (both male and female) that have the type of behavior that you would like the puppy to have. Of course, there is a great deal of variability between individuals, so that breed and parental behavior will not always be indicative of what the puppy will be like. If the parents have been previously bred together, the behavior and health of these siblings from previous litters may provide additional insight into how your dog might grow and develop.

Although you should avoid selecting puppies that are shy, withdrawn, or fearful, selecting a friendly and nonfearful puppy does not ensure that this behavior will persist into adulthood.

In fact, little or no predictive value has been found in assessing puppies under 3 months of age, since these puppies are still developing their social skills and many problem behaviors do not begin to emerge until sexual or social maturity. However, as puppies age, these criteria do begin to become more reliable.

Puppies that are stimulated and handled from birth to five weeks of age are more confident, social, exploratory, faster maturing and better able to handle stress as they develop. Puppies obtained from a breeder or home where they have had frequent contact and interaction with people are likely to be more social and less fearful as they develop. Puppies that have spent a large amount of time in pet stores or confined in cages may not have had the environmental stimulation needed to easily transition to a new home.

There is a sensitive period in the development of most species when they develop social attachments with their own and other species, independent of punishment and rewards. In fact, both positive and negative events seem to accelerate socialization. The events that occur during this socialization period determine the puppy’s future social partners, as well as the species with which it feels comfortable. By recognizing the critical time frame in which canine socialization develops, you can help to ensure a healthy social attachment to people and other animals, including other dogs.

The primary socialization period for dogs begins at 3 weeks of age and is already diminishing by 12 weeks. Peak sensitivity is at 6 – 8 weeks. Fears begin to emerge around 8 weeks of age, so that beyond 12 weeks of age, fearfulness may surpass sociability. Although there is a great deal of variability between breeds and individuals, dogs should be socialized to as many people, animals and situations as possible before the sensitive socialization period begins to wane. However, regular social interactions should continue through adulthood so that puppies do not regress and become more fearful as they grow and develop. The 6 – 8 month period appears to be another important time where social contact should be maintained, or social skills may diminish and fear may escalate.

To help develop a healthy social relationship with other dogs throughout life, dogs should maintain their social contacts with their mother and littermates until 6 to 8 weeks of age.

What is the best age to obtain my new puppy?

Since it is critical for the puppy’s development to interact, observe, play and learn with members of its own species, the puppy should remain with its mother and littermates until about 7 weeks of age. Then when placed in the new home, social contacts can be expanded to new people and species while still in their primary socialization period. Also by this time puppies will begin to develop preferences for elimination sites, so that this is a good age at which to begin house training.

What can I do to assist my puppy in its social development?

Generally, there should be little problem with a puppy that is less than 12 weeks of age developing healthy and lasting attachments to the people, sights and sounds in its new home.

Your puppy is most likely to become fearful of stimuli that are not found in its day-to-day routine. Make a conscious effort to identify those people and situations to which the puppy is not regularly exposed. For example, if there are no children in the home, you might arrange regular play sessions with children. If you live in the country, make a few trips into the city, so that the puppy can be taken for walks on city streets, or through neighborhood plazas. Conversely, a puppy that grows up in the city might become fearful or aggressive toward farm animals that it was not exposed to during its early development.

Introduce your puppy to as many new people and situations as possible. People in uniforms, babies, toddlers, the elderly, and the physically challenged are just a few examples that might lead to fear and anxiety unless there is sufficient early exposure. Similarly, car rides, elevators, stairs, or the noises associated with traffic, trains, airplanes, or hot air balloons are some examples of events and experiences to which the puppy might be habituated.

One way to facilitate the introduction of the puppy to new situations and people is to provide a reward such as a favorite toy or biscuit each time it is exposed to a new stimulus. Having a stranger offer a biscuit to the puppy will teach it to look forward to meeting people and discourage hand-shyness, since the puppy will learn to associate new friends and an outstretched hand with something positive. Once the puppy has learned to “sit” on command, have each new friend ask it to “sit” before giving the biscuit. This teaches a proper greeting and will make the puppy less likely to jump up on people.

Be certain that the puppy has the opportunity to meet and receive treats from a wide variety of people of all ages, races, appearances and both sexes during the formative months and well into the first year of life. There will of course, be times when your puppy is in a new situation and you do not have treats. At those times, use a happy tone of voice and praise your puppy for appropriate responses.

If your puppy seems to panic, back off a little and try again later, rather than aggravating the fear. Be sure to identify any emerging fear and work to revisit the situation slowly and gradually using favored rewards to turn the situation into one that is positive.

Is it healthy to take my puppy out in public at such a young age?

There is always a concern about the risks of taking the puppy out of its home before it is fully vaccinated because it may be exposed to an infectious disease before the protective immunity has developed. However, the benefits gained from these early public experiences can be enormous, and without them the risk of the puppy developing permanent fears or anxiety is a serious concern.

One solution is to have people and healthy vaccinated animals visit the puppy in its own home, until it has completed its primary puppy vaccination series. A compromise is to take the puppy out to meet people and other pets in low risk environments. As long as you are following your veterinarian’s recommended vaccination schedule, taking the puppy for walks along the sidewalk and avoiding neighborhood parks where stools and urine might accumulate is generally safe.

Another valuable aid is to enroll the puppy in puppy socialization classes. If these classes are held indoors in a room that can be cleaned and disinfected, and all puppies are screened for vaccination and good health prior to each class, then these classes provide good exposure to people and other dogs in a low risk environment. In addition to ensuring that vaccines are up-to-date and each puppy is parasite free, requiring that all puppies in the class have been in their new home and appear pretty healthy for at least 10 days before enrolling will help reduce the risks of disease transmission. This time period is longer than the incubation period for most of the serious contagious canine diseases. Not only do these classes offer an opportunity for play and socialization with a variety of people and dogs, they also help guide the owners into proper training techniques from the outset. Recent studies showed that taking puppies to puppy socialization classes decreases the chances of relinquishing puppies and increases long-term socialization, thereby providing your puppy with better tools to cope with future situations.